I Feel So Used 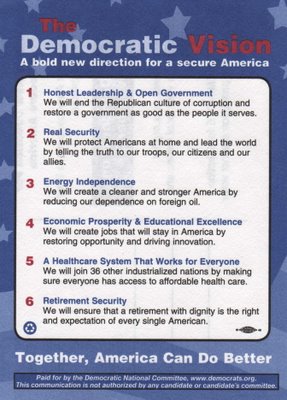 Get real. The proud Democrats in the Senate stood by as a few so-called maverick Republican Senators challenged King George’s Freedom through Torture Bill. After only a short few days it seems that McCain and Company have a “conceptual” agreement. That seems to be code for “We don’t know what the hell we’ll do – but we scored some points for the Republican’s bid to maintain their majorities in the Senate and House of Representatives”.

The Democrats were thinking that they could watch the Senate Republicans self-destruct, but instead got caught with their pants down. It was all a show. The Republicans will preserve and support the President’s and our republics stumble from the high road of human rights and the preservation of human dignity. We will parse the meaning of torture and continue to lawyer our way to disaster.

The Democrats failed to jump into the fake fray and make it real. Too many defense contractors padding your pockets, so you won’t take a real stand for what is right and decent and American? The Democratic Party’s inaction is further proof that the fish rots from the head down. Our Democratic Leaders are truly out of touch with the Americans that they should be serving. The Do-Nothing Congress and the Imperial Presidency are serving the needs of the big corporate puppeteers.

I saw an advertisement the other day for a book about net activism. We know it – don’t we? The jackass on the other end of the tug of war rope gets a hard kick in the behind. Would someone tell me how we are to really do that? Is the blogosphere just another distraction for one demographic group within the “masses”? Sex, drugs, rock’n roll, and television just doesn’t work for everyone. Computers, broadband connections, Google, YouTube, Blogspot, and email – are they just another opiate for the bipolar, hyperactive, and intellectually over-sexed?

Would somebody please pass me a valium?

I received a campaign packet from the DNC today which further fueled my anger and disappointment with MY party. I got the usually Rah Rah letter, plea for money, and mini-poster. A really cheesy set of 5 “Liberty Postcards” was included. I am supposed to take these informative cards, apply postage, and mail them to 5 voters that I am to “adopt”. What freaking information is there? Six bullshit talking points that say absolutely NOTHING!

No plans. No substantive goals. I would be painfully embarrassed to send that crap to anyone.

It says – “Together, America Can Do Better”. Well, folks – I was a teacher and I need some concrete lessons plans. No stupid conceptual language.

Stop jerking your voters, supporters, and activists around. Give us a real plan. Fight for what is decent and right or WE won’t be staying with this lame ass party much longer.