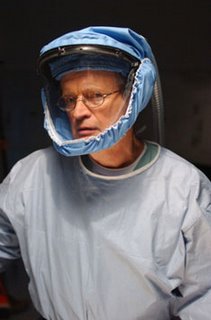 The word is slowly leaking out. Rove and Company is salivating at the prospect of a giant boost in the opinion polls’ job approval ratings for King Bush. Prepare to see the approval ratings for the handling of the Wars on Terror and Iraq soar. Shortly after the November elections we will learn that the Torturer and Chief, George W. Bush, has moved in the Navy forces needed for the opening salvo in the next war -- code name – Desert “Roll the Rug Up” Freedom Farce.

Andrew Sullivan’s Daily Dish has the latest on the rumors about Osama Bin Laden. Andrew also provides us with this link to where we may discover what really happened to OBL.

Meanwhile, Dr. Donald Mallard from the Naval Criminal Investigative Service (NCIS) is traveling to Afghanistan with the rest the team following shortly. The NCIS team has to detour to retrieve retired Special Agent Leroy Jethro Gibbs from his beachfront shack in Mexico. The NCIS team is expected to present the definitive report that will shock and awe the world. Government sources predict that we will learn the truth sometime in early October. Stay tuned for further reports.
Posted by Lee Harris at 4:44 PM