DeVos is a Dick 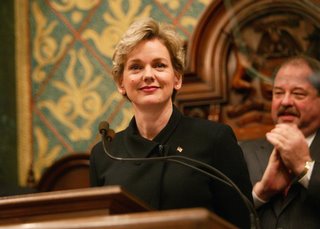 I must admit that I did not see nor do I plan to see any of the gubernatorial debates between Michigan Governor Jennifer Granholm and the Amway Ambassador to , Dick DeVos. I am not a masochist, nor can I afford to replace a television that I could potentially demolish as I watch the debates. The strain of watching a truthful sitting Governor debate a feckless pathological liar would raise my blood pressure too high or cause small objects to fly toward the television screen.

Please go to Voice of Mordor for a brief review of the Dick’s debate performance.

It is even difficult reading about these debates, let alone watching all of the DeVos lies in his political adverts.