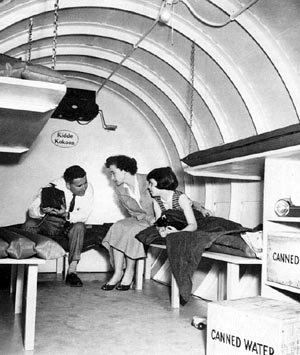 I was born in 1955. I do not remember ever having any “duck and cover” drills in my public school; however I clearly remember traveling to a department store with my family and looking at a corrugated metal backyard fallout shelter. I remember the television drama showing a family retreating to its shelter and the hysterical neighbors begging to be let in. I do remember having a family discussion about the location of the nearest public fallout shelter (the “round” Michigan National Bank). I do recall seeing the fallout shelter signs prominently displayed in numerous downtown stores. I remember the fear.

Like many things in life, those fears where replaced by other fears – and I grew up. We learned the utter futility of having a fallout shelter. In time, my personal nightmares about “the bomb” were replaced with bad dreams about tornados.

By sixth grade I was more concerned about my mother losing her life from lung cancer. In that year the newest cigarettes bragged about being just a millimeter longer. I wrote a report on the dangers of smoking and used a clever rephrasing of a well-known television and print ad declaring that peoples’ lives were going to be just a little bit shorter. Sadly, my mother died at age 61 after a one-year battle with lung cancer. My oldest brother, Gary, died this past May at age 59 after his yearlong fight with lung cancer.

I know something about having fear. I have an acute understanding about the relationship between our actions and the tragic consequences that may follow. I know that tobacco farmers and cigarette manufacturers have profited by growing and selling the most useless and deadly plant that is legal to grow. I remember that my government was complicit in my family’s addiction by giving cash subsidies to tobacco growers. Why weren’t those damn freaking farmers encouraged to grow crops that didn’t assist in the deaths of countless millions of people in this world?

may have just entered the unholy fraternity of nuclear nations. And, George W. Bush is our amoral and dangerous frat boy.

Well, I had better get to some stretching exercises so I may more easily, when the time comes, bend over and kiss my ass goodbye.