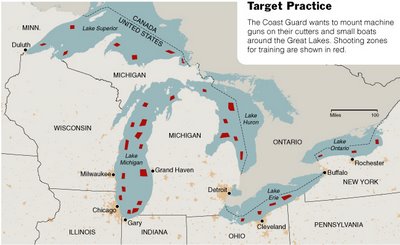 As I suspected, the chief concerns about the proposed live fire exercise on the were boater safety, environmental safety, and the locations. The Coast Guard’s plan for 34 live fire sites has caused concerns throughout and . The Coast Guard will continue to accept public opinion until November 13. Decisions regarding the live fire plans will be made after that.

The Times Herald reports today that:

“Several in the audience of between 75 and 100 people took issue with the Coast Guard's study showing no long-term effects from lead, zinc and other materials in the bullets or casings during a five-year period.

Five years isn't enough to predict long-term effects, said Judy Ogden of . The recreational boater and angler said she fears toxic materials could build up in the long term.

"There's the possibility that the lead would accumulate into worms and whatever's in the bottom of the lake," she said.

Ogden and several other people at the meeting also were worried about boater notification.

The Coast Guard plan includes six zones on , one of which will stretch from Port Sanilac about 18 miles north to White Rock. The zones will be used several times a year for target practice.

The Coast Guard plans to announce firing exercises on maritime radio two hours prior to their start. Bulletins will be issued every 15 minutes during the exercise, and a boat will monitor the perimeter of zones.

Not everyone listens to maritime radio, said.”

The complete article may be found here.