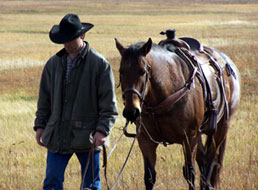 The Associated Press has discovered Scott Kleeb. [Hat tip to Daily Kos] This article in the Washington Post follows two postings on Andrew Sullivan’s Daily Dish (here and here). I also had a posting on this site after discovering information about Mr. Kleeb on one of my Required Reading blogs.

It seems that this Democratic congressional candidate may just have a chance to win in a predominately Republican state. The A.P. article states:

“In another year, the open seat would be a gimme for the Republicans, but Kleeb has turned heads _ even conservative ones. The great-great-grandson of an 1870s homesteader near Broken Bow, , Kleeb is appealing to the district's rural voters, many of whom are part of 's $6 billion beef industry.

Kleeb says his years as a rancher counts with voters.”

If the Democrat wins, it would be one for the history books. The last time a Democrat held the House seat was 1961.”

Wouldn’t it be great to see another real down-to-earth Democratic voice in Congress?

Please consider donating to Scott’s campaign at his website.