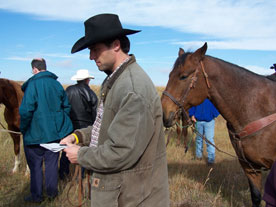 At the Daily Kos mcjoan has a report on the 3rd Congressional District were Democratic Candidate Scott Kleeb is doing well at the moment.

“But you don't get the good without getting the bad, too. The campaign got word this afternoon that the Club for Growth was getting ready to drop another $100,000 into Smith's campaign against him. That lead in the polls is likely to evaporate over the next 10 days as the television onslaught of negative campaigns begins. What he's got going for him is a great ground game. In addition to the state Party organization Markos blogged about earlier today, the DSCC and DNC are spending several million on the GOTV effort here. So while the race hasn't received any DCCC help, except being listed as an emerging race, Kleeb at least is the beneficiary of DNC and DSCC upticket largess.

He's also the beneficiary of strong supporters, some of whom are Republicans who have also just had too much of this administration and this Congress. I talked to a few of them today, at the Holdrege Chamber of Commerce coffee this morning, and at a health care providers fund-raiser tonight. While Adrian Smith isn't quite as detested and as crazy as Idaho's Bill Sali, he fits right into the mold of the radical Club for Growth candidate, to the point of advocating for the gutting of the 14th Amendment to restrict immigration. The Republicans I talked to today want no part of what Smith represents. But they're not just voting for Kleeb in protest, they're actively supporting the candidate they feel makes the best sense for .”