Who Supports the Troops? 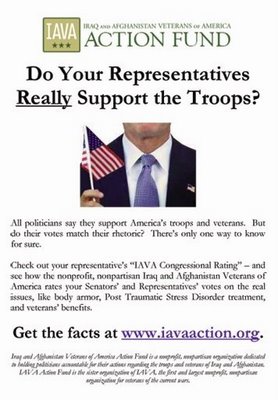 Democrats! (Well, most of them in Michigan.)

At the website of the and Afghanistan Veterans of America (IAVA) there are “Congressional Ratings” of our Senators and Representatives. They are rated on the “real issues, like body armor, Post Traumatic Stress Disorder treatment, and veterans’ benefits. According to their ratings flier:

A big thank you to Bob Geiger via our friends at Daily Kos –Daily Kos has the complete breakdown of our Senators’ ratings listed by grades. Please check out how well the Democrats have done in contrast to the Republican Senators. You may check out the full ratings here.

Here are the results for Michigan Senators and Representatives.

Senator Debbie A. Stabenow (D) A-