The Worst Congress Ever 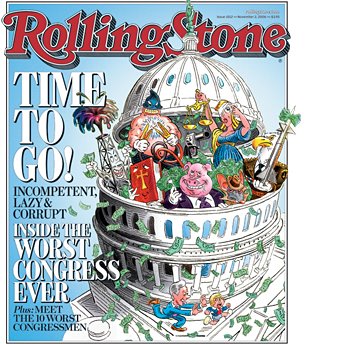 Here is a must read.

The Rolling Stone has a very thoughtful and well researched indictment of our Do-Nothing Congress.

“It is no big scoop that the majority party in Congress has always found ways of giving the shaft to the minority. But there is a marked difference in the size and the length of the shaft the Republicans have given the Democrats in the past six years. There has been a systematic effort not only to deny the Democrats any kind of power-sharing role in creating or refining legislation but to humiliate them publicly, show them up, pee in their faces. was once a chummy fraternity in which members of both parties golfed together, played in the same pickup basketball games, probably even shared the same mistresses. Now it is a one-party town -- and congressional business is conducted accordingly, as though the half of the country that the Democrats represent simply does not exist.

American government was not designed for one-party rule but for rule by consensus -- so this current batch of Republicans has found a way to work around that product design. They have scuttled both the spirit and the letter of congressional procedure, turning the lawmaking process into a backroom deal, with power concentrated in the hands of a few chiefs behind the scenes. This reduces the legislature to a Belarus-style rubber stamp, where the opposition is just there for show, human pieces of stagecraft -- a fact the Republicans don't even bother to conceal.”

“The greed and laziness of the 109th Congress has reached such epic proportions that it has finally started to piss off the public. In an April poll by CBS News, fully two-thirds of those surveyed said that Congress has achieved "less than it usually does during a typical two-year period." A recent Pew poll found that the chief concerns that occupy Congress -- gay marriage and the inheritance tax -- are near the bottom of the public's list of worries. Those at the top -- education, health care, and Social Security -- were mostly blown off by Congress. Even a Fox News poll found that fifty-three percent of voters say Congress isn't "working on issues important to most Americans."

One could go on and on about the scandals and failures of the past six years; to document them all would take . . . well, it would take more than ninety-three fucking days, that's for sure. But you can boil the whole sordid mess down to a few basic concepts. Sloth. Greed. Abuse of power. Hatred of democracy. Government as a cheap backroom deal, finished in time for thirty-six holes of the world's best golf. And brains too stupid to be ashamed of any of it. If we have learned nothing else in the Bush years, it's that this Congress cannot be reformed. The only way to change it is to get rid of it.”