You Can't Make This Stuff Up 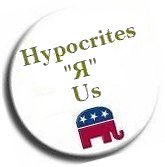 Part of the proclamation states:

“'s strength is found in the spirit and character of our people. During National Character Counts Week, we renew our commitment to instilling values in our young people and to encouraging all Americans to remember the importance of good character.

As the primary teachers and examples of character, parents help create a more compassionate and decent society. And as individuals, we all have an obligation to help our children become responsible citizens and realize their full potential. By demonstrating values such as integrity, courage, honesty, and patriotism, all Americans can help our children develop strength and character.”

Bob Geiger’s reactions are pretty much the same as those of us who are intellectually honest about the failed Imperial Presidency of GWB. He states:

“Of every president in history, how hypocritical is it for George W. Bush to talk about integrity and honesty? This is a guy who ran for president saying that "it’s time to restore honor and dignity to the White House" and then proceeded to set new records for lying to the American people, while making the the most despised, disrespected country in the world.

The president who speaks so stridently about honesty is the same guy who got people to vote for him by claiming over and over that he was a "uniter not a divider" and then went on to bitterly divide this country more than it has been since our own Civil War.”

“I also don’t recall in grades K-12, my time in the military or my subsequent four years of college leaning that it was part of our national "character" to unilaterally invade a sovereign country with no justification and with no direct threat to us but, hey, maybe I missed that day of class. I'm also pretty damn sure that our national character isn't embodied in the number of Republicans who have been nailed for everything from accepting bribes to money laundering in the last few years and I think the court of public opinion has already weighed in on how much character it takes for the GOP to launch a major cover-up to protect one of their pedophiles in Congress.

I don’t have the space required to outline every bit of dishonesty and lack of character shown by Bush, Cheney, Rumsfeld and their whole cabal of miscreants, but it also includes Bush lying about his party's wedge issue of the new decade -- gay marriage.”

[In the interest of full disclosure – I stole the button graphic from the DU site.]

We live in interesting times.

George Bush celebrated this National Character Counts Week by signing the Military Commissions Act of 2006. And, the Republican vision of our national character is codified. We imprison suspected terrorist indefinitely, torture, through aside habeas corpus, and hold court proceedings that would embarrass our Founding Fathers.

The following can be attributed to Anthony D. Romero, ACLU Executive Director:

"With his signature, President Bush enacts a law that is both unconstitutional and un-American. This president will be remembered as the one who undercut the hallmark of habeas in the name of the war on terror. Nothing separates more from our enemies than our commitment to fairness and the rule of law, but the bill signed today is an historic break because it turns and other facilities into legal no-man's-lands.

"The president can now - with the approval of Congress - indefinitely hold people without charge, take away protections against horrific abuse, put people on trial based on hearsay evidence, authorize trials that can sentence people to death based on testimony literally beaten out of witnesses, and slam shut the courthouse door for habeas petitions. Nothing could be further from the American values we all hold in our hearts than the Military Commissions Act." [Full text HERE]