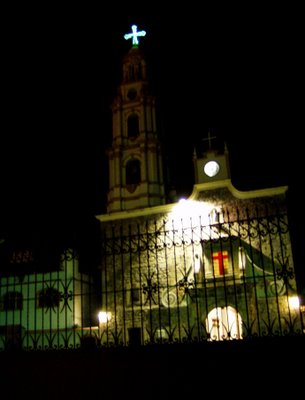 Perspective, as shown in my night time picture of one of the churches in Ajijic, is surely in our own eyes.


When I took the picture I didn't pay attention to how level the horizontal line is and concentrated more on the lights and architecture. I even stopped in front of the church last night to ponder how I could get a level shot standing on a steep street. The only changes from the original photograph is some simple cropping. In that simple act, I both presented my newer perspective for you to interpret and started to accept another perspective of my own.


A classic theme or plot line in theatre, TV, and books is several re-tellings of a tale from each of several witnesses of an event with some plot twist or another. The "actual" event is often presented to conclude that every thing that we perceive is absolutely seen through eyes and thoughts that may have a "different view".


Ultimately, one of the lessons we learn is the answer to the question about "who makes who angry?" It is strange to think of my own anger as a "choice". I chose to feel "XYZ" about some event or decision I make. I could even learn to forgive without strings or retribution. Any of us could be as gentle and as forgiving as the Amish in the community where their children where murdered by a mad man.


Every minute in reality is forever a matter of perspective.

Every minute in reality is forever a matter of perspective.