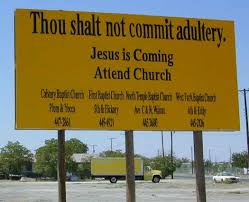 Nevada Senator Ensign (R)--- adulterer --- refuses to resign because he is not bound by anyone's moral code.  But, in the end he will be taken down for being stupid enough to violate laws that are still on the books.  Ensign stated that Bill Clinton should resign from office because of Clinton's admitted adultery with Monica Lewinsky.  No, Ensign has had no plans to resign.  He even announced his bid for re-election to the Senate about 1 year before it is customary to do so.....

Why should he resign?  Afterall, adultery is not a federal crime.  Other than the phreaking DOMA, the matters of marriage are left up to the individual states.  You know, another "State's Rights" issue.  Adultery laws vary in the U.S. .....  As for Senator Ensign, he will likely be taken down for a violation of election law, bribery, tax evasion, and/or major ethics violations.  The payoff to Ensign's mistress, husband, and two of their three children may be the key in removing the morally challenged hypocrite from political office.

I seriously want to know why the Christianists in the United States are not going apeshit over the adulterous legion of Republican Party elected officials.  Really.  Are high moral values only applied to and expected of Democratic leaders?  Where is the fucking outrage?  Senator Vitter (R-LA) screwed a prostitute after taking off his diaper, Senator Larry Craig attempted adultery in an airport restroom stall, Newt stepped out on wife one before marrying wife two and I don't know where number three comes in his blanking definition of marriage, Governor Sanford took a hike on the Appalachian Trail, Senator John McCain stepped out on wife number one with wife number two, and, not to be forgotten, former U.S. House of Representative Mark Foley (R-Florida), attempted to meet up with underage boys for sex.

Why aren't the teabaggers demonstrating against these morally challenged hypocrites?

We are truly in a bizarre 1984-like world.  War is Peace.  Torture is harsh questioning.  Adultery is Family Values in overdrive.