With Malice Toward None

I'm not sure how old I was when my father took the family for a drive into the outskirts of the small community where we lived and I saw for the first time what only can be adequately described as tar-paper shacks. As poor as we were, it was hard to fathom that other families lived in such structures. Our Michigan winters must have been particular difficult for them to endure. It seemed to me, at the time, that we must have been lucky to live in the "real" house that we had in our neighbor in the shadow of the Blue Water Bridge.

When I was old enough to help my brother with the "family" paper route, I discovered more folks that definitely were less fortunate than ours. Many of the houses on that paper route were just not as nice as ours and some of the families that were our customers were much poorer. I discovered that women didn't have to be married to have children and that one particular family could only survive with the assistance the rest of the public gave them through "welfare". Welfare wasn't a dirty word in our family as we had cousins whose father abandoned them and they couldn't make ends meet on the monies our aunt could earn.

I discovered that old folks didn't have to be married to live together as man and wife. When I questioned my parents about that couple I learned a lesson about Social Security pensions and widow benefits. Whatever moral outrage that may have been learned by me was replaced with a pragmatic understanding of love and economic reality. That couple loved each other dearly but could not risk poverty in their old age to have the "benefits" of marriage.

A few years back, a book/essay was published that touted that everything or rather every life lesson the author had needed to learn was taught in kindergarten. I agreed with most of what was written but could respectfully argue that his education would have been further enhanced by having been a paper carrier. I learned a lot by having customers move away in the middle of the night and fail to pay their newspaper bill. Having that drunk come to his door screaming at me to shove the newspaper up my ass was another interesting lesson for a young teenager. I learned about kindness. Mrs. Young taught me about desperate loneliness. Delivering papers year-round through blizzards, rain or shine taught me about hard work. I learned about real people -- working with the public was important for me. I learned about life.

My education was a bit lacking then as I had yet to learn about rich people. My education about those folks happened only after high school and college. In fact, I'm still learning about the folks that have lived such sheltered lives that they are completely unaware of how their words and actions can be so offensive on so many levels to those of us that have struggled in life. Some folks, like the millionaire members of the United States Senate, have no clue about the hardships of the folks living paycheck to paycheck or about those that have fallen over the edge. They just don't "get it" and may probably never understand that obtaining health care and food should be considerd a human right. It is mind boggling that the words of Christ about charity and love are completely lost on some of those people.

I'm not writing this to brag or suggest that somehow what I've learned has made me superior in any way. In fact, I'm humbled that I have had the blessings and the life experiences that have placed me here and now. I realize now that my family was probably only one of life's disasters away from losing all that we had or would ever hope to have. The industrial accident that nearly killed my father could have been the event that would have prevented my sister, brothers, and me from having the lives we have now.

I've been blessed in this life. I am thankful.

Today, a young women was at our gate. She rang our bell and waited. She had only one thing to say to me and there was only one possible response.

Here in Ajijic like in many corners of the world there are people that are hungry. We always have a few visitors come to our weekly market to beg for money. Lately, there seems to be more. Around the corner, near our grocery store there sits a man with no legs. He shakes a plastic container and blesses you when you are able to help him and his family. A few yards away from the man without legs there often sits an older native Mexican women with her own cup seeking monies. She always has a beautiful smile for us and similar blessings when we have the change and ability to assist her. On occasion, a blind man with a sign reminding us that we can "see" this wonderful day in paradise stands with his cane and container and gratefully accepts whatever help he receives.

So, today, when I am told that someone is hungry and needs something to eat, I don't judge. I don't ask the Congressional Budget Office to work up the future costs and implications. I don't look to see if she is wearing designer clothers or bling. I don't ask the Lord what is the right thing to do. I act. I open my heart and my wallet as my parents and Sunday School teachers taught me. I give.

There really is no need for any of us to ask WWJD. Do you really need to ask yourself what would your brother or sister do for you?

What will you do? 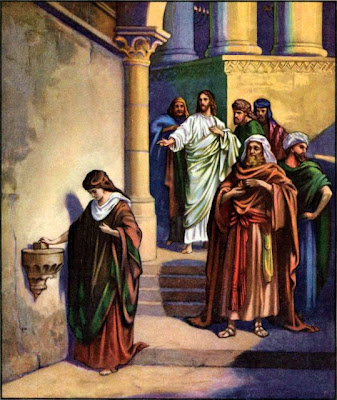