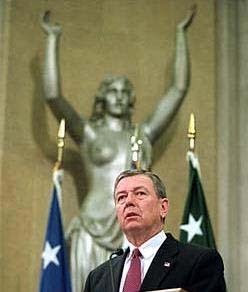 Former Attorney General John Ashcroft had an expensive drape placed over the statue, Spirit of Justice, because it offended his Christianist sensibilities. We all laughed about that back in 2002. Now, it has been revealed through the torture report released today, AG John Ashcroft had no qualms about water-boarding one terrorism suspect over 100 times in a one month period. He knew and approved of torture.

Hypocrite -- a person who pretends to have virtues, moral or religious beliefs, principles, etc., that he or she does not actually possess, esp. a person whose actions belie stated beliefs.
.
Posted by Lee Harris at 11:33 PM