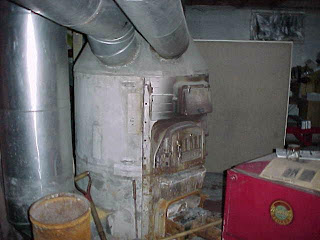 I can still picture in my mind nearly every detail of the home where I spent most of my growing years. We lived there from the time I was about 3 years old until the year I began high school. The two-story frame house had 3 bedrooms and a bath on the top floor; a living room, kitchen, laundry room, and a 1/2 bath on the main floor; and a full basement. Our basement included a room called the "fruit cellar" and a room called the "coal bin". The center of our basement was filled with a massive coal furnace from which several asbestos taped ducts emerged.

When I was physically able, filling the furnace's automatic coal hopper became one of my chores. That green monster demanded regular feeding during the heating season. Our dad would clear the furnace of the spent fuel, called clinker, and we boys would take turns filling the hopper so it could convey coal to the furnace. No special skills were required. A coal shovel, bucket, and a strong back was all that was needed. Hanging near the door of the coal bin were the gloves and jackets we wore as we worked. The labor wasn't hard, just tedious. Fill the bucket, dump the bucket, fill the bucket, dump the bucket , fill the bucket, dump the bucket...... We didn't wear protective eye gear or masks. And, I am certain that there weren't any child labor laws or safety standards in those days to protect the health and welfare of a nine year old tasked with the responsibility of keeping the home fires burning. I was a bit jealous of the kids whose homes were heated by oil and gas. Luckily, I had 3 older brothers to share in the labor.

When we moved to the green stucco house across the street, I was relieved to learn that the house had a modern gas furnace. Unfortunately, when we traded up to that house my mother had always coveted, we had twice the lawn to mow, far too much landscaping to maintain, and a long driveway and double length of sidewalk to shovel when the Michigan winter snows arrived. Lest I forget, the thrill of autumn leaf raking was doubled, as well.

I'm not complaining mind you. I'm just feeling a bit nostalgic about the childhood that I literally had to work through. But, that was what it was like in those days living in your own home in small town Michigan. We all contributed to the work that had to be done. Of course, we also put away the dried dishes, dusted and polished, vacuumed, and, in the all inclusive words of a labor contract, completed other tasks as required.

I can't imagine growing up in any other setting. Had we lived in an apartment in the big city we would never have experienced the joy of house and garden maintenance. And, fortunately, we didn't live in the country, either. Now there, we would have had to deal with some very serious shit. Horse, cow, chicken....... Have you ever stepped in goose goo? Yuck.

Childhood memories are to be treasured and shared. And, most of mine are "keepers".
.
Posted by Lee Harris at 6:42 AM