This Is Your Brain 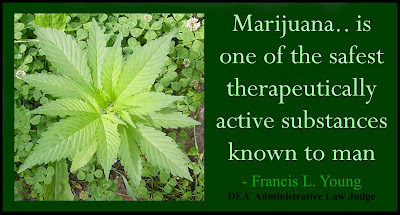 We have some good news and some bad news for all of us that want to live long and happy lives. First, the bad news from the journal Human Brain Mapping and a UCLA professor of neurology, Dr. Paul Thompson:

Those classified as overweight have 4 percent less brain tissue and their brains appear to have aged prematurely by 8 years.

The results, based on brain scans of 94 people in their 70s, represent "severe brain degeneration,"

Yikes. More about the study may be found here.

Now, the good news is found online from a study about the brain in the journal Neurotoxicology and Teratology and reported on by KTVU.com:

"Marijuana may protect the brain from some of the damage caused by binge drinking, according to a new study.

Researchers at the University of California San Diego performed brain scans on 16- to 19-year-olds in three groups: binge drinkers, binge drinkers who also smoke pot, and those with very little drug or drinking experience. Binge drinkers showed damage in their white matter. But those who drink and smoke showed more damage than the control group in only three of eight areas of the brain. In seven of the areas, their brains were in better shape than the binge drinkers.

Researchers said in a news release from the Marijuana Project that the result was unexpected. They said it could be that marijuana somehow stops alcohol from damaging brain cells."

That's really good news for the many binge drinkers I know.

So, what have we learned today? If you want a healthier brain, lose weight and, if you must drink, smoke a little mota.
.
Posted by Lee Harris at 12:35 PM