Jim Greer: Fear Monger or Racist or Both? 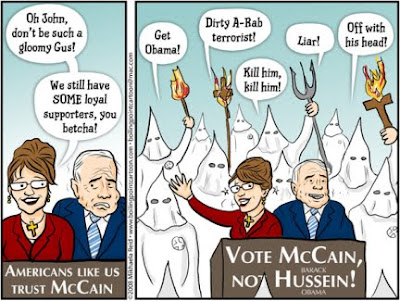 Jim Greer is the Chairman of the Republican Party of Florida. His response to the recently announced address that President Obama will be making to school children next week is incredibly asinine. The President of the United States, following in the footsteps of several former Presidents, will address school children via the internet and CSPAN about the importance of staying in school and working hard in their studies. Lesson plans have been created to supplement President Obama's classroom address.

Unfortunately, it seems to be okay for Republican leaders to lie about the President of the United States and rile those unbalanced and irrational folks that just can't accept the fact that the American people elected a black man. As we have witnessed the vile "protests" against President Obama and the current fake AstroTurf protests against health care reform, it is ever more evident that much of the hullabaloo is rooted in racism. Many elected Republican leaders have used fear and anxiety to further their personal agendas and grasps for more power. Disgusting.

Here is what Florida Republican Jim Greer had to say:

As the father of four children, I am absolutely appalled that taxpayer dollars are being used to spread President Obama's socialist ideology," said Jim Greer, party chairman, in a news release.

"The idea that schoolchildren across our nation will be forced to watch the president justify his plans for government-run health care, banks, and automobile companies, increasing taxes on those who create jobs, and racking up more debt than any other president, is not only infuriating, but goes against beliefs of the majority of Americans, while bypassing American parents through an invasive abuse of power," he added.