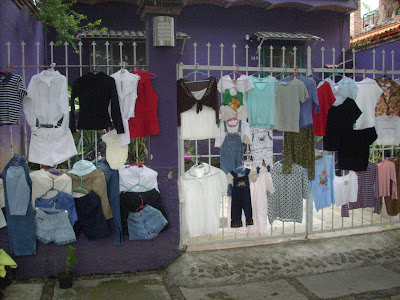 After giving our Izzy a dose of her allergy/cold medicine we went around the block and had breakfast at Laura's Kitchen. She serves a variety of Mexican and American foods. I had eggs a la Mexicana and Memo opted for an early lunch of Chipolte Meatballs with pasta. The meals were delicious.

We then went to the Tiangius, the weekly market where variety abounds. Our first stop, well actually we were waylaid, was at the booth of Rabbi Posner. He drew me over to his table with a taste of some homemade peanut butter. We meet him often at Ajijic's Plaza Central and at various restaurants around the village where he often hawks his book, Food for Thought, Character, and Soul - Recipes and Blessings Included, and promotes the restaurant that he and a dear friend own and manage in the nearby town of Chapala. The peanut butter tasted superb. Of course, the recipe includes chili powder. I bought a jar. I couldn't resist the honey, cinnamon, and spicy flavors.

Then, on to a booth selling bootleg DVD's where Memo treated himself to a recent blockbuster release and something or other about Wonder Woman. Our next stop was at the Anita's Animals booth. We visited with the new kittens, found a pair of Wranglers that should fit Memo, selected 4 used paperbacks, and purchased a loaf of banana nut bread and a loaf of gingerbread. The booth sells used books, second-hand clothing, CD's, and freshly baked breads. We visited with our friends at the booth, left an additional donation for the brothers and sisters of our pride, and moved on to our last stop.

We didn't buy anything at Jose's jewelry booth. We gossiped. As we were discussing the woes of a gringo loco, a friend of Jose's offered us some delightful fruit filled empanadas for 5 pesos each. Twenty pesos later and after visiting with some more friends that were shopping we headed home.

The day is only half over, but I think I need a nap.

The photograph above was taken today in the front of our house. A lady that lives nearby has been using our front walk, fence, and gate to display her ropita since before we moved into this house. She sells mostly children's clothing every Wednesday. We are so close to the tiangius that she does a pretty good business with the foot traffic from the village and from those that park on our street.

Such is life in our corner of paradise.
.
Posted by Lee Harris at 12:55 PM