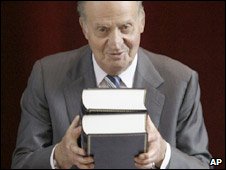 Years and years ago, I would get a chuckle out the attempt by the French to rid their official language of foreign words.  It seemed to be an annual thing with some academics announcing the proper French terms to be used instead of the English, German, or another languages' words that crept into French usage.  Do they still do it?  Maybe, I'll look.

The Spaniards have the right idea.  The Royal Language Academy of Spain (RAE) has launched a new grammar book for the over 500 million in more than 20 nations that speak Spanish.  According to an article at the BBC:

The new guidelines do not set cut-and-dried dogma on what is correct and what is not.  Instead, they make recommendations as to what linguists generally accept to be proper Spanish.  "Rules are set by speakers. What the academy does is observe and document," the RAE president said.  But until now grammar rules in nations outside Spain had been never acknowledged, said Mexican linguist Rocio Mandujano.

"We know now that we are not speaking poorly. It's only a different
grammar," Ms Mandujano, from Mexico City's National Autonomous
University, told the Associated Press news agency.

As a student of the Spanish language, maybe I'd benefit from one of the versions of the book.  Maybe Santa will bring it to me next year.  Maybe.