Growing up male, I often heard about and indeed experienced the conflicting standards and expectations for young woman and young men when it came to premarital sex.  Of course, the "party line" was that no one should have sexual relationships outside of marriage.  The wink wink nod nod for young men was actually "Please don't, but if you do wear a condom."  Indeed, if a woman has sex outside of marriage, she is a slut or a whore.  Men that violate the same societal taboo are congratulated and no stigma is attached to the act or actor.

For some crazy zany reason, the double standard exists in politics, too.  When the Republicans pass important game-changing legislation via the reconciliation process in the United States Senate it is perfectly okay to do so.  If the Democratic Party proposes to pass legislation using reconciliation in the Senate, somehow it is a bending of the rules or some sort of nuclear event.  The rules really don't change, but somehow the main stream media and all the conservative blowhards choose selective amnesia and stupidity over truth and historical FACTS.

Please note the nifty chart published yesterday and how, despite the lies about bipartisanship, it shows us an accurate history of the use of reconciliation.  And, please take a gander at this chart that I saw on the Rachel Maddow Show last night (and published on AMERICAblog today).  Look at how the nation's debt was increased by the two Bush tax cuts for the rich and how health care reform is projected to help lessen our debt.  And, notice, People, the tax cuts were passed using reconciliation.  I love a good graph. 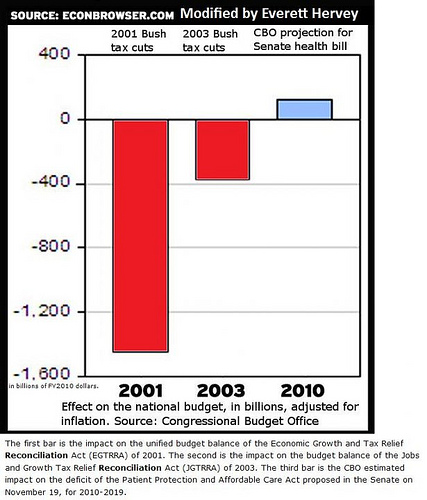 Labels: honesty, Mock the GOP, Mock the Republican Party, The Party of No, unrepentant hypocrisy